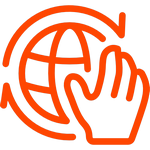 As the name already suggests, ALL4FREEDOM --> FREEDOM4ALL, if we ALL take action 4FREEDOM, there shall be FREEDOM4ALL. Our primary endeavour is to unite and the outcome of the mission totally depends on the cooperation and contribution of all those involved including you, yet, in return, ALL4FREEDOM has some stuff to offer.
ALL4FREEDOM claims that FREEDOM4ALL is possible if everyone, and all stakeholders, varying from individuals like you and other potential IAM4FREEDOM Heroes, the FREE PEOPLE, the people's representatives (both the FREE PEOPLE REPRESENTATIVES as the NON FREE PEOPLE REPRESENTATIVES) to the partner organizations and (media) sponsors, takes his or her responsibility for freedom by uniting and motivating one and other. ALL4FREEDOM stands up for the FREE and NON-FREE PEOPLE and is realised by all people and parties involved.
MoreLess

Using successful projects such as DANCE4FREEDOM and ART4FREEDOM, ALL4FREEDOM calls upon you and every individual (IAM4FREEDOM ) to stand up and take collective action (ALL4FREEDOM ) in order to reach the final objective (FREEDOM4ALL). ALL4FREEDOM is all about all of us, about kick-ass campaigning and seriously supporting the initiatives and FREEDOM4ALL is about all enjoying freedom.
At first the plan was just to urge the FREE PEOPLE to stand up for the NON-FREE PEOPLE. But with the rise of IS, Islamophobia, racism, homophobia, xenophobia, dictatorships (Russia, China and many other countries which follow these economic examples), global government control, threatening the freedom and personal privacy of us all, it is necessary to waste no time in making a statement by standing strong, devoted to defend and promote freedom, human rights and the right to be yourself (BSUR) 4FREEDOM.
In addition, individualism, ignorance, indifference and impotency have left most of us minding our own business, being too busy with our partner, kids, family, jobs, health, hobbies, sports, social media, etc. and often dispirited and dog-tired to care less, lacking both energy and time when the world is-, or stops, at our very doorstep. Therefore, it is time to take the time, to motivate and mobilize the movement, making waves on a local lake as well as on our global oceans, before ALL4FREEDOM and comparable communities, due to freedom (free internet) restricting measures, might no longer be capable of making such a difference!
In order to offer a complete contribution to the cause, ALL4FREEDOM's strategy is twofold and various 4FREEDOM projects are actively empowering the mission on both fronts. The global safeguarding of our freedom both at top-down-level (vertical) national governmental (whether or not enforced via police and military) down to citizen oppression, as well as, locally, among the general public (horizontal) is a crucial component of our future strategy and of mankind. When fighting 4FREEDOM, all the IAM4FREEDOM Heroes together have one of the loudest voices in history having real game-changing impact on the leaders decisions. See also 'how we do it'.
ALL4FREEDOM is the prominent and promising people-powered platform, freedom-first community and the world’s leading, independent and international movement, moving, empowering and uniting unique, freedom-valuing, individuals, companies, clubs, media, projects, partnering organizations, world leaders and all, who, within their talent and time, connect, commit, campaign and contribute, actively, by demonstrating their dedication and devotion to defending and further-forwarding freedom, honouring human rights and respecting the right to be yourself and to be free, ALL 4FREEDOM!