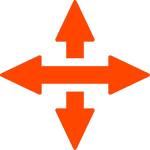 When we look at horizontal freedom, then think of bullying behaviour between the people and such situations where others deliberately limit/attack your freedom. Miserable moments where and when you experience being bullied at school, verbal and/or physical violence on the streets or the night scene, discrimination due to skin tone, religion, sexual orientation, handicap, hairdo, clothing, opinion, etc.
Show MoreShow Less

If you want to change the world, you have to start small and with yourself. Be the change you want to see. Locally, live the exemplary role. Originally, ALL4FREEDOM is a Dutch initiative, founded in Amsterdam, which might not be a mere coincidence. For centuries, the country and city are famous for their freedom, tolerance, open-mindedness and progression. Amsterdam, as a city and a living example to those still stuck and skeptic, should soon spread and swing its wings out to the awakening world of fine followers in search for future progress, wealth and happiness. In addition, The Netherlands is the ideal try-out land for lancing new innovations and (television) concepts, housing i.e. The International Court of Justice in in The Hague. Starting slowly and locally, in Amsterdam, The Netherlands, we all shall spread and sow the seeds by showing how it is and can be done.

Everyone is 4FREEDOM and FREEDOM =  4EVERYONE; our job is to unite you ALL 4FREEDOM! This is why we ask you, and every individual (as an IAM4FREEDOM Hero) to take joint action (ALL4FREEDOM ) in order to reach the final freedom goal (FREEDOM4ALL). This is your chance to change the world! FREEDOM4ALL suggests that we ALL enjoy and flourish within that full freedom vibe, we deserve and so long for. At ALL4FREEDOM it is all about ALL of us (yes, this does include you!) making that mutual mission, making an effective effort, making it work and making a true contribution to the common cause.

Of course, 4FREEDOM projects are ideal to inspire IAM4FREEDOM Heroes here and have them help so-called horizontal local freedom on its way. People play an important part pairing with projects as DANCE4FREEDOM, KIDS4FREEDOM, PHOTO4FREEDOM, LGBTI+4FREEDOM, etc. From there on, we don't sit idle and collectively contribute to the cause and common ideal, as neither you or nobody, can be free until we are all free. We have noticed that we are not alone and therefore, we believe that this might just work, many heroes have had such a horizontal head start thus sending out that freedom vibe before you or which might have hailed you in and even more may freedom-valuing folk will follow from whatever actions you are about send and share. All aligned and focused, ALL4FREEDOM and FREEDOM4ALL!
In order to offer a complete contribution to the cause, ALL4FREEDOM's strategy is therefore twofold and the 4FREEDOM projects are active on all fronts. Finding and foresting freedom from within and, en mass, forwarding freedom into the future and towards them totalitarian tormenting regimes, roughnecks and rascals. The global safeguarding of our freedom both at top-down (vertical) national governmental and global level, as well as locally among the general public (horizontal), is a crucial component of our future strategy and of mankind.
Feel free to click on through and check out our other 'How sections' on the about- or 4FREEDOM Projects pages.